The village of Wolxheim, situated at 20km west from Strasbourg, is nested just beside the limestone cliff of Horn. 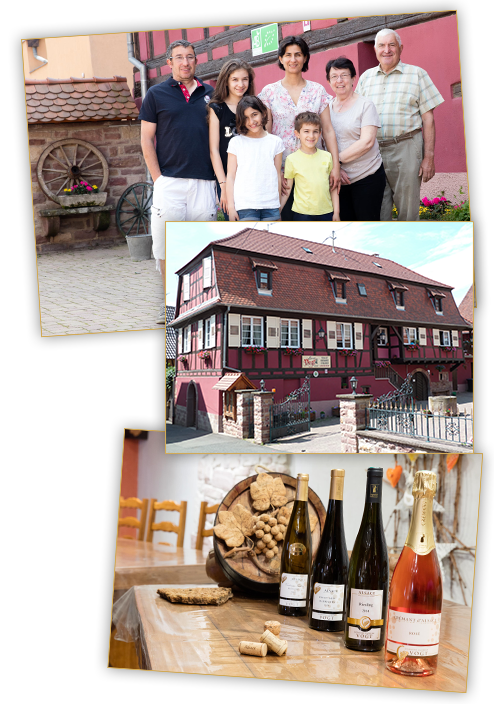 This name is well chosen because this cliff is like a sunbeam above the vineyard, with the shape of a horn. The jhbishop Jean de Manderscheit took inspiration from it in 1579 when he decided to create the « Horn’s brotherhood ». To be part of it, you had to drink at one gulp the 4 litres of Wolxheim contained in the horn ! The cliff is dominated by the statue of the Holly Heart, built in 1912 : It protects and blesses the vineyard and the village.
Situated in the Dagobert royal property, delimitated by four villages : Osthoffen, Westhoffen, Nordheim and Sundheim (now known as Soultz-Les-Bains thanks to its mineral water), the vineyard was reputed and very long-desired. Abbeys and castles, accordingly to experts, have joined their efforts to obtain pieces of land..
From some royal pits, called like this after the King Louis visited them, people removed pink sandstone to build the Strasbourg’s fortifications. One of its ministers, Mr Vauban, had the canal along the weevil dug in 1682 to transport stones and wine. Later on, one of those pits’ owners became a famous sculptor : Philippe Grass (1801-1876). He was the creator of the General Kleber’s statue as well as the one for about 50 statues in the cathedral, which were destroyed by the revolutionary iconoclasts.
We must name Napoléon 1st who was calling the Wolxheim Riesling (according to Sir Auguste Stoeber, historian) : « My favorite wine ».
Wolxheim is one of the jewels of the Golden Crown, Strasbourg’s vineyard, thanks to its historical references an its very high quality wine, which constantly surprises.

… THE VOGTS,
TROUGH THE HISTORY